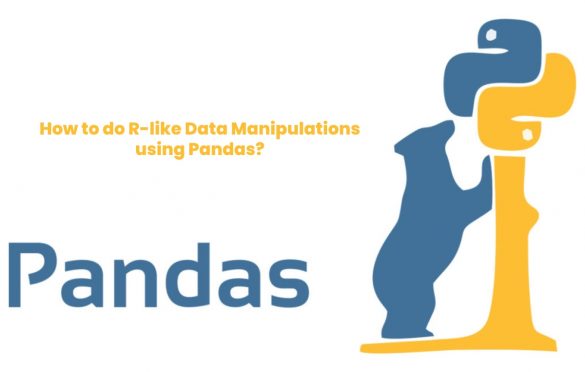 How to do R-like Data Manipulations using Pandas?

Python is the most preferred programming language across the globe today and R, is undoubtedly the best tool for data visualisation. There is so much more to Python other than using it for building applications, like manipulating data. Beginners might feel it challenging to shift from R to Python or vice-versa while working with such requirements. Being said that, it is also important to understand that both of them are the common approaches since there are many data manipulation tasks performed using R, but it is also possible to carry out using Pandas in Python.

In this article, we shall understand the roles of R and Python in handling and manipulating data. Let us also compare and contrast data manipulation using R and Pandas. This helps beginners understand the differences and choose the best amongst them or even switch between them.

R programming language is free and open-sourced and is used for statistical computing and graphics, and it is underpinned by the R Foundation for Statistical Computing. The R language is widely used among statisticians and data miners for developing statistical software and data analysis.

R is the S programming language implementation combined with lexical scoping semantics inspired by the Scheme. S was created by John Chambers while at Bell Labs. The programming language was designed and developed by Ross Ihaka and Robert Gentleman at the University of Auckland, New Zealand, and is currently developed by the R Development Core Team.

R can be thought of as an implementation language and environment specifically designed for analysing data statistically and graphically. Various statistical analysis approaches such as clustering in R, testing, classification using tree based models, nonlinear modelling, etc. It also proves comfortable since it offers various features to perform graphical analysis and produce highly interactive plots for any kind of data. It provides several toolkits to perform data-related tasks.

Pandas is a software library under the Python programming language written for data analysis purposes. It provides a Python data structure called a DataFrame that is similar to a table in a relational database.

Pandas library in Python is used for a variety of data-related tasks like manipulating data and data conversion. Pandaa uses the data stored in tabular formats. Along with these tasks, Pandas can also be used for other purposes, such as data warehousing using Pandasql. It can inspect data using functions while the data is moved in or out of the process. This makes the Pandas library under Python a toolkit.

Let us look at the comparison between R and Pandas library based on data-related tasks.

Comparison between R and Pandas library

Other data operations comparison between R and Pandas include:

We have seen various toolkits that can perform data analysis in both R and Pandas in Python. We have to keep in mind that R packages are supposed to be installed separately since they are spread out in the language in the local system. On the other hand, if Pandas is used to perform similar operations, all the functions can be managed and maintained in a single place. It does not require any other tools to be installed on the local device.

Both R and Pandas provide different features that can perform the same function. You can measure the differences in terms of user-friendliness, speed, flexibility, and approaches. However, Pandas is no less than an R programming language to perform data manipulation tasks.

The R language is still the users’ choice since it provides good speed and the best interface for data analysis purposes and is much more user-friendly compared to Pandas. It is also less complex compared to working with the Python programming language. That being said, both R and Pandas can be considered the best fits depending upon the function you need them for.