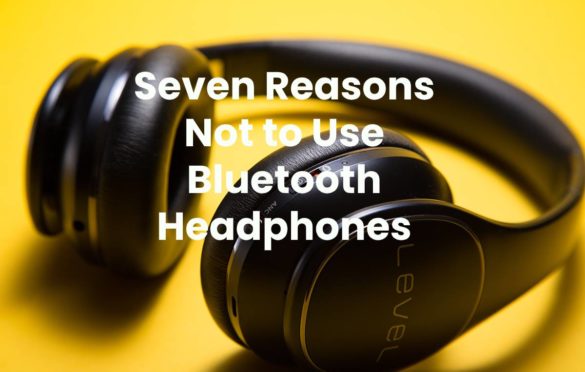 Seven Reasons Not to Use Bluetooth Headphones

Some manufacturers have certified the death of the 3.5mm jack. Sometime after, manufacturers like Apple have eliminated it from their mobiles.

It has become clear that the industry is not prepared to eliminate it since the alternatives that exist are worse, less comfortable, and incompatible with other platforms if we talk about connectors such as USB C.

Manufacturers are working to make the jack extinct, even though some large companies such as Samsung or LG continue to include it in their mobiles to users’ delight. Using USB C headphones prevents them from being used in other devices, and using adapters leaves us the charging port occupied, so you cannot charge and listen to music at the same time without a dongle.

I was removing things from mobiles such as the removable battery, which has brought other additional advantages, such as waterproofing, which is even almost more useful. Removing the jack prepares not to offer any advantage other than the manufacturer because there is more than enough space inside the mobiles. The S10 will have a jack, IP68 certification, and a 4,000 mAh battery. There is plenty of room.

Bluetooth headphones are the current best alternative, but they remain the worst option for the following reasons.

For environments such as sports or places where there is a lot of noise, a Bluetooth headset can be “enough” and even better and more comfortable. However, on long trips, both on public transport or in places where there is no noise, wired headphones’ sound quality is higher, especially for its price. Headphones with a 20-euro jack will hear much better than a 20-euro Bluetooth, since Bluetooth, being a digital signal with compression, causes a lot of information to be lost along the way.

Have to Charge Them

Bluetooth headphones need to remain charged, and most of them use a micro-USB connector when mobiles have USB C, forcing you to carry two cables. Then if they run out of battery, you have to turn to the jack again, either those headphones or others that you carry as a spare. Another option is to carry an external battery, but it also forces you to carry one more gadget and be aware of the battery status.

A wired headset can last over a decade without problems if the connector doesn’t break. However, Bluetooth headphones last less for several reasons. In the first place, they become obsolete in terms of sound quality, with the appearance of new codecs and sound improvements. Second, the batteries in these headphones degrade over time (especially if they are Chinese). With just 100 or 200 full charges, we can see battery life plummet, plus they are harder to repair if something happens to them.

Use Multiple Headphones at the Same Time

When we go on a trip with someone, we usually watch a movie or series together. For this, a splitter is required for the jack so that two headphones are connected. However, unless your Bluetooth laptop/mobile and headphones are compatible with the 5.0 standard, you can only connect one Bluetooth device at a time.

You Can Turn any Headset into Bluetooth

Fortunately, any headphone jack converted to Bluetooth with adapters. Despite this, we again have the problem that we must keep an eye on the battery status of this adapter and go with the cable hanging. Xiaomi has one that works quite well for 20 euros.

Bluetooth headphones introduce latency into the sound. Although you hardly notice the difference when listening to music. When watching movies, playing games or any professional use, the difference is noticeable. This latency is usually more than 200 ms in regular headphones, for the 34 ms that those that use the AptX Low Latency codec reach. Headphones with a jack have only 7 ms latency.

You Will Always need a Replacement Headphone Jack

Is Headphone Jack the Future?

The industry seems determined to sell us Bluetooth headsets at outrageous prices. We have nothing more to see the AirPods. And the like that other manufacturers sell to realize that we are being sold comfort at a high price. When for that same money, we could be obtaining excellent sound quality. The AirPods are worth 159 euros, but for that same money. We can buy a Sennheiser HD 579 for crazy sound quality. And have the remaining 45 euros to buy any other Bluetooth headphones, such as the ENACFIRE E18 for 46 euros.

Unfortunately, the jack will tend to disappear due to the manufacturers’ interests to sell us accessories at a high price.  Whether they are Bluetooth headphones or adapters to connect our current headphones. Bluetooth is the future, but there is still hope that manufacturers will realize that having a jack. In mobile phones is useful and that many users use it. Bluetooth presents too many problems and few benefits.

Review Seven Reasons Not to Use Bluetooth Headphones. Cancel reply