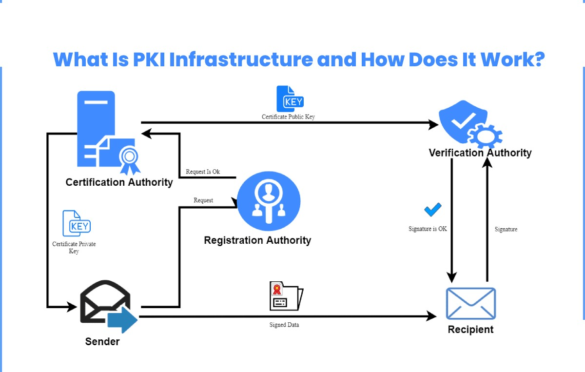 What Is PKI Infrastructure and How Does It Work?

Through the issuing and maintenance of digital certificates, PKI security aids in the management of encryption keys. To assist in preserving security, these PKI certificates validate the owner of a private key and the legitimacy of that connection in the future. For the digital world, the certificates are similar to a driver’s licence or passport.

PKI verifies your identity and that of your server.

It allows users of your site to validate your server before connecting to it (to ensure that they’re connecting to a real server). Client certificates can also be used to restrict access to just authorised users. You’ll have more control over your network and other IT systems as a result of this.

Encryption and decryption are made easier using PKI. PKI allows you to encrypt and decode data or transmission channels utilising the secure SSL/TLS protocol by employing digital certificates and public encryption key pairs.

Your data’s integrity is ensured by PKI. Users, their browsers, and their devices can utilise PKI to determine if the data you provide has been tampered with.

To obtain the server’s identity and public infrastructure key, the web client (for example) connects to the Amazon.com webserver.

The client then checks if the certificate issued by that site was issued by a trusted CA using its trusted root certificate store and the chain of trust. (The chain of trust is built on non-falsifiable digital signatures.) So, if the trust chain looks OK, your browser can be sure it’s interacting with the right server.)

The client then encrypts a piece of data and delivers it to the server using the certificate’s public key. If the server can read it, it means it has the proper private key and is communicating with the proper server.

What Is PKI Encryption and How Does It Work?

Data is encrypted by a public key and decrypted by its matching private key in the PKI environment.

Is it possible to authenticate digital certificates?

PKI works by encrypting data (in this example, a digital certificate) with a cryptographic key and then decrypting it using a different key. The idea is to have a separate key for encryption and decryption. One is a private key, which is kept by the key owner, and the other is a public infrastructure key, which is shared with everyone. The private key can be used as an encryption key or a decryption key, depending on the application.

Review What Is PKI Infrastructure and How Does It Work?. Cancel reply