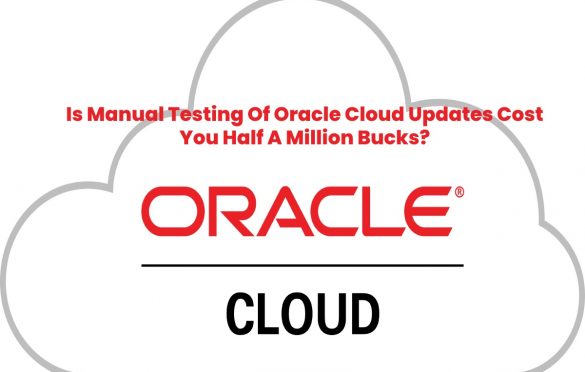 Is Manual Testing Of Oracle Cloud Updates Costing You Up-To Half A Million Bucks A Year?

One of our client while evaluating our test automation solution for Oracle Cloud apps called us and told – “Holy S**t, we’re losing around 550K a year because we’re not able to test our oracle cloud updates properly.” And then over 30 minutes, he went on ranting about support cost, business disruptions, and a whole lot of things that he faced while manually certifying Oracle Cloud updates.

This is not the story of our client alone!

Oracle rolls out updates quarterly that require at least two rounds of testing. Moreover, the first round of testing takes place in the test environment while the other round occurs two weeks later in the production environment. In the case of our client, he was facing testing challenges on multiple fronts starting from Business Analysts (BAs), then test managers, testers, Subject Matter Experts (SMEs), test reviewers, and finally the regression test execution teams. In nutshell, the entire functional testing organization was facing the issue. Each group used to identify its process challenges with the current manual test design approach.

Our client went on saying that

“QA teams were using multiple modelling tools. Building an application flow was not only complicated for them but also time-consuming. The testers and developers were taking a considerable amount of time and all the team members were on different pages.”

“Another challenge which we’re facing was inadequate test coverage and traceability in Oracle testing. Often similar or duplicate test cases were created and executed, resulting in wastage of time as well as efforts. It became really difficult to priorities things like speed time to market, adopt agile, and increase automation penetration. Compliance risk was another issue due to delayed upgrades.”

“Multiple execution tools, programmers and specialists kept on increasing the testing costs, however, testing was taking its usual time. We’re in great pressure as product release delay had become normal. We’re looking for Oracle test automation that can reduce pressure as well as testing cycles.”

In the end what our client told us

Summarizing what our client got in the end

Review Is Manual Testing Of Oracle Cloud Updates Costing You Up-To Half A Million Bucks A Year?. Cancel reply